Description: Experiment nº7 aims to promote the use of local hardwoods for glulam production (Presentation of Experiment nº7). To achieve a good performance, several topics were considered during the experimental campaign which was divided into 3 main tasks:

The non-destructive characterization is a key driver to grading timber at sawmills and then the production of EWPs (Engineered Wood Products) can be more accurate and reliable both for homogeneous and heterogeneous glulam elements fabrication. Several glulam beams were produced with at least five lamellae and each one was previously non-destructively characterized in terms of dynamic modulus of elasticity. With that information, the beam’s cross sections were defined, and the static modulus of elasticity was predicted through the Transformed Section Method (TSM).

More than 35 glulam beams without finger joints were produced with PRF adhesives and tested at SerQ’s laboratory with different configurations, such as single species (9 from poplar – PTP; 17 from 2nd quality beech – SB with the homogeneous and heterogeneous layout) and hybrid elements (7 from poplar + blue gum – HBGBP; 5 from poplar + 2nd quality beech – HSBBP). On the other hand, CESEFOR was focused on the production of glulam beams made with beech lamellae with finger joints (Fig. 1). Beams are already produced and tests are being carried out. 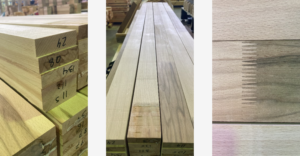 The mechanical performance was assessed through 4-point bending tests, determining the static modulus of elasticity, and bending strength (Fig. 2). Non-destructive characterization was also applied to glulam beams. After each failure test, full cross-section samples were cut to determine moisture content as well as to assess the bonding performance through both delamination and glue line shear strength tests. It was also performed the analysis of beech finger-joints tests in tension (Fig. 3). 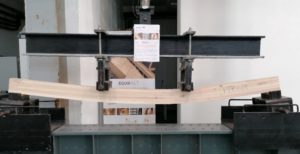 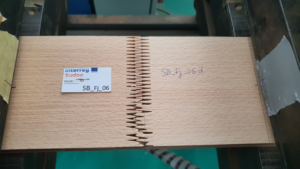 The main results achieved so far are listed below (some are still being processed): 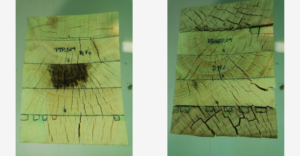 Results from Experiment nº7 were partially published in a Master Thesis carried out by Cláudio Ferreira at the University of Coimbra in collaboration with SerQ. Also, a paper presented at the Sustainable and Digital Buildings Conference (Leiria, Portugal), shows the potential of using poplar for load-bearing structures.