Description: The experiment carried out by ENSAP in Bordeaux consists of studying the impact of adding thermal mass behind the external face of the thermal envelope of a building whose construction method is wood-frame. 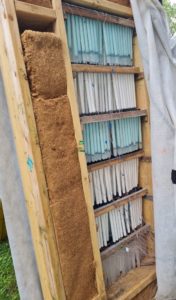 The envelope elements, enriched with these thermal masses, were tested on the western façade of a positive energy wood-frame building on the Bordeaux campus.

These tests show that in summer, the presence of one or other added thermal mass has a temporary “thermal barrier” effect:

Thus, in SudoE regions, this temporary thermal barrier is sufficient, for vertical envelope elements, to ensure summer comfort, by drastically limiting the attack of the thermal insulation by the thermal wave generated by the summer environment.